Skip to content
Games News and Features TV and Streaming 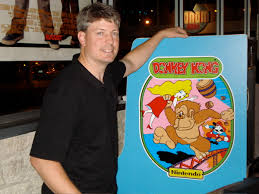 Legendary gamer Steve Wiebe will attempt to reclaim his â€œDonkey Kongâ€ throne at the 2009 Electronic Entertainment Expo (E3) and G4 viewers will have a live front-row seat to all the action. Wiebe was the first person on record to break a million points in â€œDonkey Kong,â€ a high score that he ultimately lost to his nemesis Billy Mitchell as documented in the popular film â€œThe King Of Kong: A First Full Of Quarters.â€ Twin Galaxies, the authority on video game score rankings, will provide the official â€œDonkey Kongâ€ unit and be on-hand to record Wiebeâ€™s score as he attempts to break Mitchellâ€™s world record and reclaim victory. G4 is bringing fans exclusive access to this special event on Tuesday, June 2 as part the networkâ€™s week-long E3 coverage.

Wiebe lived a quiet life in Washington until he lost his job at Boeing and found solace in his video game obsession, â€œDonkey Kong.â€ At the time, Billy Mitchell, a hot sauce mogul and an icon in the world of competitive gaming, held the record for the highest â€œDonkey Kongâ€ score, and Wiebe made it his mission to break that record. He not only perfected his game but surpassed Mitchellâ€™s record and ended up with a thought-to-be-impossible 1,000,000 points. A wave of media coverage followed and Wiebe quickly became a celebrity in his hometown of Seattle. Meanwhile, Mitchell hatched a plan to reclaim his fallen “Donkey Kong” record and, in the months that followed, Wiebe and Mitchell engaged in a cross-country duel to see who could set the high score and become the real â€œKing of Kong.â€

Wiebeâ€™s story is featured in the documentary â€œThe King Of Kong: A First Full Of Quarters,â€ which G4 aired as a world television premiere last year. The film ranked as one of G4â€™s highest rated telecasts ever and more than doubled the network’s total day household delivery.

Since the documentary and the loss of his title to Mitchell in 2007, Wiebe has attempted to break the record four other times but to no avail. With his latest attempt in October 2008, he scored 1,000,200, which is only the second time that a million point score has been achieved in public but it was still not enough to knock off Mitchell. Now, as he gears up for his fifth effort, fans can witness live what Wiebe hopes will be his sweet revenge and gaming history.

Twin Galaxies will also be on-hand to ensure the challenge is legitimate every step of the way. The company will provide the official â€œDonkey Kongâ€ unit that has all the required factory default settings, as well as a senior referee who will make sure Wiebeâ€™s attempt is officially recorded and will announce his victory if he succeeds.

M. Night Shyamalan’s “Knock at the Cabin” – A Thrilling Yet Disappointing Horror Adventure