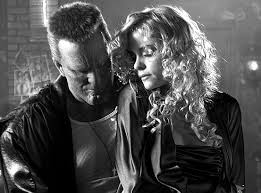 This is really terrible news if it’s true, folks. My inside sources have just informed me that Mickey Rourke is angry at more than just his opponents in the upcoming Darren Aronofsky film, “The Wrestler.” Seems Rourke is at odds with Robert Rodriguez over the casting of Rose McGowan in the follow-up to the groundbreaking “Sin City,” now due out in 2010.

Word is, Mickey doesn’t consider McGowan to be a real actress which, naturally, upset Rodriguez and prompted Rourke to exit the production as soon as it became apparent that the majority of his scenes would be with the director’s girlfriend.

Since this is just a rumor and IMDB.com is still listing Rourke in the cast, we’ll have to hope for the best that this is, in fact, just a rumor and that Marv will be back on the big screen come two years from now.