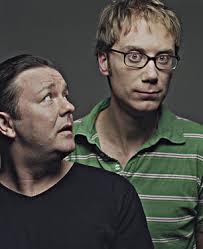 The BBC has learned that Office and Extras writer Ricky Gervais and Stephen Merchant are set to reunite to write a feature film script. The project has the title The Men at the Pru and concerns a group of 20-somethings in the 1970s.

“They work for the building society and they’re having a great time, but it’s about them coming of age and having to grow up,” Gervais told the BBC.

It’s not the kind of set up that Hollywood blockbusters are made of, but Gervais and Merchant make comedy gold out of mundanity. The goings on at a Slough paper manufacturer don’t sound like basis for the decade’s best sitcom, but we all know how that turned out.

It doesn’t seem that Gervais and Merchant will be starring in the film (we don’t think it’s unkind to say they look like they’re out of their ’20s) and there’s no indication of whether they might direct. Gervais is currently working on his feature directing debut, This Side of the Truth, in which he plays the first liar in a world where telling untruths has not been invented.