For a few weekends every year, Disney/MGM Studios Theme Park becomes an outpost of a galaxy far, far away — unearthly characters in getups beautiful and bizarre roam the streets, browsers congregate at an exotic bazaar to choose among limited-edition treasures found in few places throughout the galaxy, and everywhere can be heard the immortal words “May the Force be with you.”

This year, “Star Wars” Weekends will take Disney World Guests out of this world on Fridays, Saturdays, and Sundays, between June 1 and 24. And, as he has been almost every year since the event began, actor Warwick Davis will be on hand to sign autographs, ride in the Legends of the Force Celebrity Motorcade, and meet the fans who make these weekends so special. Warwick found his acting career launched when he played Wicket the Ewok in “Return of the Jedi,” and he still has a special place in his heart for the “Star Wars” films and the fans who love them.

“People do get dressed up. It’s the hot Florida sunshine, so it does not lend itself to becoming a Jedi in a hooded robe, but nonetheless … 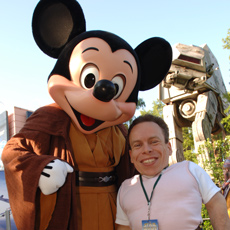 … people do come. There might be a lightsaber wafting around, and all sorts of characters,” says Warwick. “What’s lovely is that I’m seeing children who were coming to the first few ‘Star Wars’ Weekends, and they were little babies and might have been dressed as a little Jawa or a baby Jedi — but now they’re 10 years old and they’re still dressing up, and Dad’s as enthusiastic as he ever was. So I’m seeing families coming back year after year.

“‘Star Wars’ Weekends mean a lot to many fans, and they’ll plan their vacations around the event. Another kind of person we get at “Star Wars” Weekends has just chanced upon it — they had their vacation booked, and when they got to Disney World they suddenly realized ‘Hey, we like Star Wars! Let’s check this out.’ They have a wonderful time, just stumbling on the event. It doesn’t cost anything beyond admission to Disney-MGM Studios, and you get so much more.”

And what exactly do Guests get? A star-filled parade, a chance to meet a variety of actors from the films and costumed “Star Wars” characters, a peek at the making of the films, a trivia competition, and kids even have a chance to get a little Jedi training of their own.

“We always try to give the audience more than they’ve read in magazines or interviews — it’s more of a personal touch,” Warwick says. “We have chat sessions, and of course signings as well — people can bring along their own memorabilia, or receive a photo on the spot that we will then sign. That is a very sought-after event, and he recommends that fans grab a wristband for admission early in the day, because the signings fill up fast.

Warwick is not immune to the delights of Walt Disney World Resort — and he admits that, even after a long day of meeting and greeting, he loves to explore the Theme Parks. “It’s a pretty full-on day of doing various appearances, but about five o’clock it frees up and at that point I’ll have a little plan and make my way around to the different Parks. Disney assigns us a VIP tour guide, and I’ll ask ‘Can we nip here? Can we nip over there?’ We’ll run around and do a few rides. It’s normally pretty early to bed, to be honest! I don’t usually last until the fireworks because it’s been a long day.”

Last year was a special one for Warwick — he not only participated in “Star Wars” Weekends, but got to host. “It was really the most wonderful event for me,” he says. “I would have loved to have hosted again, but I’m so busy working on the film at the moment, and the schedule wouldn’t allow me the four weeks I would have needed to work on the event. I’m a bit disappointed, because I had such a good time last year,” he laments.

The film in questions is “Prince Caspian,” the second in Disney’s “The Chronicles of Narnia” series, and Warwick has a plum role as the wicked dwarf Nikabrik. “I do like playing baddies!” he admits. “As an actor, they’re always the most memorable roles. It’s a part you can get your teeth into — sometimes literally!” He says the cast has been sworn to secrecy — but that fans of the first film, “The Lion, the Witch and the Wardrobe,” will not be disappointed.

Warwick will be back and forth working on the film until the middle of June, but he was determined not to miss “Star Wars” Weekends altogether. Especially this year, when Lucasfilm Ltd. is celebrating the 30th anniversary of the “Star Wars” Saga. It’s a dilemma, but one for which Warwick has proposed an answer: “I wish there were three or four of me — I need to talk to George Lucas about a bit of cloning!” he laughs.

We’re still waiting for that day. In the meantime, you can meet the one and only Warwick in person on June 1 through 3 at this year’s “Star Wars” Weekends.

Cybergosh will be on hand on both the June 1 & June 8 Weekends this year during OC31.

The Future is NOW

Why PlayStation 5 is Better than Xbox Series X