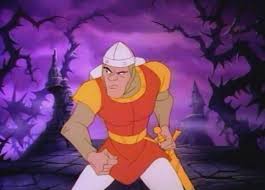 Bluth confirms the film is still in the works! I personally get excited about seeing ANY traditionally animated film by The Bluth, let alone a Dragon’s Lair film! Awesome…

Goldman comments that he’s hopeful since Disney is restarting their traditional animation division, but says there’s a log jam of CG projects out there and people can’t afford to go to every one.

Goldman adds that Bluth “has boarded some of it already. It’s a funny, funny script. … The movie is actually a prequel. You’ll follow Dirk from birth until he becomes a knight.”

Dyer seems to hint that an “unusual dragon” first featured in the Dragon’s Lair comic books would appear in the movie. “This dragon has amazing powers,” Dyer reveals, at which point Bluth cautions Dyer not to give anything else away and the commentary ends.

The Future is NOW

Why PlayStation 5 is Better than Xbox Series X